Measured deflection over duration of trial

The grain size distributions are shown in the graph at the left hand side. The sand foundand used in the test site 'Haarle' is rather silty. The green and the red line are from that site.It is clear that the soil changes significanlty with changing depth.

The graph below shows results of in-situ measurements of the soil stiffness after installation.
The cone resistance of the cone when passing the sidefil. The Modulus deduced from this test is also shown a s well as the modulus deduced from the pressiometer test by Menard. Also the results of a simple impact cone test are shown. This test is the most easy one to handle and does not need specialist treatment.

The properties of the soil were measured before and after installation.
The measurements were partly carried out in the field, partly in the laboratory.
All laboratory tests were performed at the laboratories of Fugro, certified acc. EN45001, nr. L34.

Sieve test
This test is performed according to NEN 2560.
In this test the grain size is determined by sieving.

Maximum Proctor density
This test is performed according to RAW  1995, proef 5.1 STD.
In this test one start of with dried soil. The weight of the soil sample is measured, after compaction of the soil in a calibrated cylinder. Then a percentage of water is added to the soil and the previous procedure is repeated. By doing this several times with different moisture contents, one obtains a curve from which the maximum density and the related optimum water level is obtained. Later on, the soil samples taken in the field and weighted are related to this maximum density.

Oedometer test
In this test the consolidation of the soil is tested. It is comparable to the creep ratio test in plastics, but now the same sample is tested at different load levels. The method used is the Keverling Buisman procedure. The sample has a diameter 65 mm and a height varying between 19 and 20 mm.

In situ density
The in situ density has been determined using two methods, one called the volume ring method and the other called the nuclear density test.
In the first test, an undisturbed sample is taken from the soil, and weighted. The weight is related to the proctor density found in the laboratory. The second test makes uses of an X-ray source that transmits its radiation through the soil. A receiver is measuring the amount of radiation received. This amount is a measure of the density of the soil.

Hand cone penetrometer
With this test a small cone is driven by hand into the soil up to depths of 30 - 60 cm. Meanwhile the force is measured.

Impact cone
This test is very familiar with the static cone test, only now the cone is driven into the ground by using impact energy. The cone, connected to a rod is placed at the soil surface. Then a falling weight is dropped from a fixed length on the rod. The number of blows needed to drive the cone 30 cm into the soil is a measure for the compaction of the soil.

Grain shape
The shapes of the grains are classified acc. to NEN 5104 and the scale acc. to M. Powers. The shapes, hooked or round, tell something about the geo-technical history of the soil, as well it can help to understand some of the properties.

With this test the load-deformation behaviour of the soil is characterised. The test is done in both native soil, as well as shortly after installation. The method used is described in the French standard N NFP94-110.
First a hole is bored up to the appropriate depth after which a probe is lowered into the borehole. Then by pressurising the probe, and monitoring the volume change, information about the behaviour of the soil is gained. This pressurising is done stepwise, by which a curve of pressure against volume change is obtained. From the test the yield and failure stress of the soil is determined, as well as the soil stiffness value, which for our purpose is probably the most interesting.

Cone pressiometer tests
This test is in many aspects the same as the Menard test, with the difference that now the hole is not made by boring but by penetration.
The experience of Fugro is that the latter test is less sensitive for operation, as some comparative tests showed that the reproducibility is better of the cone pressiometer test.
The Menard test is difficult to perform in loose soil, as the   bore hole easily collapses. This was also shown during the trials.
With the Menard tests more test  failures were shown.
In light of the objective of the test programme with TEPPFA it was decided to use both test methods, especially since the cone   pressiometer test allows to study the effect of unloading and reloading, which provides potential data for further parameter analysis.

Cone penetratione test
The Cone penetration test used in this programme is the so- called 'Landscout' . It is a light sounding tool, since a relatively small cone is used. This makes the tool more sensitive for local changes in soil stiffness, and it allows penetrating very close to the pipe. Also this test is performed in both native and back filled soil.

Tri-axial tests
These tests have been performed for the clay used. It describes the clay's behaviour when loaded, and moreover give information about the failure conditions of the clay.

Pipe properties
All laboratory tests on the pipes were performed at the laboratories of Wavin M&T, certified acc. EN45001, nr. L054.
The following pipe properties were measured : 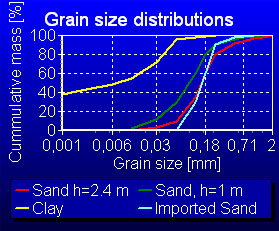