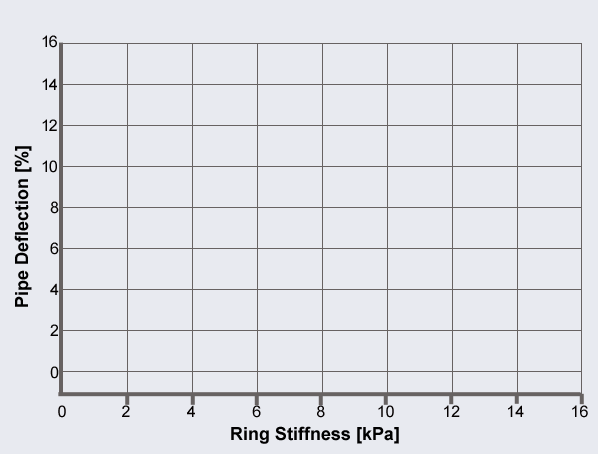 The design graph shown provides the possibility to show the deflections, which are obtained after installation and the deflections that occur after the soil has settled.
The graph has been obtained by analysing the results of the work carried out by TEPPFA on the performance of buried thermoplastics pipes. The project was carried out in the period 1996-2001. The results of this analysis were verified with results from other studies, including the results of measurements performed in operational sewers throughout Europe.

The graph is valid for:
1. Burial depths of more then 60 cm. The data used for evaluation were representing depths between 30 cm and 6 meter. It was shown that traffic load and depth are insignificant parameters. In other words they do not affect the pipe deformation. It only speeds up the settlement of the soil, meaning that the final deflection is reached within a rather short period after installation.

2. Soil types varying from granular to cohesive like clay.

4.All thermoplastics pipes in the stiffness range of more than 2 KN/m2 at least fulfilling the ring flexibility test. Further they shall fulfil EN13476, EN12666, EN1852 and EN1401.

6. Pipe diameters.
Up to and including1100 mm.
Up to this diameter deflections were verified. However, when applying the volume approach technique, it is found that the graph is also valid for bigger diameters.

The graph does not cover the use of big lumps of dry clay, which are dumped on top of the pipe.